Super Mario Land bought the classic Mario platform games that we loved on our NES home console to a portable system for the first time; acting as the launch title for the Game Boy. This game saw not only the introduction of Princess Daisy into the Mario series for the first time but also introduced us to the Kingdom of Sarasaland.

This was the first Super Mario game not to be produced by Shigeru Miyamoto or his counterparts in Nintendo EAD and was instead produced by a Nintendo R&D team headed up by Gunpei Yokoi; who had previously been responsible for producing Donkey Kong and Donkey Kong Jr.

When you are playing as standard plain old Mario it's The 'A' button to jump and holding the B button to run, if you are piloting a vehicle like the Marine or Sky Pop then pressing 'B' will act as the fire button to blast away your foes.

You can beat every boss in the game by physical attacks or pushing the button behind them with the exceptions of Biokinton (the cloud boss) or Tatanga (The mysterious spaceman). Like in pretty much all platformers if Mario collects 100 coins he gains a 1-Up, and once a hundred thousand points are scored Mario also secures an extra continue.

Other standard features include the Super Mushroom which increases Mario's size and enables him to take one hit from an enemy without passing on, and the Star which grants Mario invincibility for a brief time.

At the end of every level in the game there is a standard exit, and a special exit, the special exit (if you can get to it, its usually quite a challenge) will enable you to participate in a bonus game and earn rewards like extra lives or power ups.

The game is set in Sarasaland which is made up of four Kingdoms: The Birabuto Kingdom, Muda Kingdom, Easton Kingdom and Chai Kingdom. Each kingdom has different enemies and themes.

Super Mario Land's official story is as below, its from the games instruction booklet. I miss the days of games having a nice little back story on those manuals. One of my favourite things was the story of the game on the back of the box or instruction booklet - a big factor in what game I chose as a kid.

Once upon a time, there was a peaceful world called Sarasaland. In this world there were 4 kingdoms named Birabuto, Muda, Easton and Chai. One day, the skies of Sarasaland were suddenly covered by a huge black cloud. From a crack in this cloud, the unknown space monster Tatanga emerged to try to conquer Sarasaland. Tatanga hypnotized the people of all the kingdoms so that he could control them in any way he liked. In this way he took over Sarasaland. Now, he wants to marry Princess Daisy of Sarasaland and make her his queen. Mario came to know of these events, and he has started on a journey to the Chai Kingdom where [Princess Daisy is held captive, in order to restore peace to Sarasaland. Can Mario defeat Tatanga, release people from his interstellar hypnosis, and rescue Princess Daisy? It's all up to you and Mario's skill. Go for it Mario!

In order to save Daisy, Mario made his way through all of the four worlds, defeating the enemies that lurked there. The journey was difficult, as Mario had never seen these creatures before, but he eventually managed to defeat Tatanga's four lieutenants, King Totomesu, Dragonzamasu, Hiyoihoi, and Biokinton. However, after beating Biokinton, Mario had to battle Tatanga in his heavily armed ship, the Pagosu. After a tough battle, Mario defeated Tatanga, and rescued Daisy. Tatanga managed to escape with his life, but Daisy still thanks Mario, and the two ride off together in a Sky Pop.

It is revealed in the sequel, Super Mario Land 2: 6 Golden Coins, that Wario used the events in this game to take over Mario's castle. Tatanga is seen working under Wario. 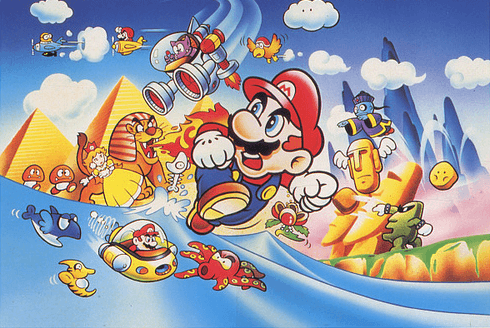 In the beautiful kingdom of Sarasaland, a mysterious alien has appeared and hypnotized the inhabitants while kidnapping Princess Daisy™ for himself!
Travel over land, in the air, and underwater as Mario™ runs, jumps, and bounces his way to fortune and glory on his mission to save Princess Daisy and restore peace!

Super Mario Land was the first time Mario took his popular platforming adventures to a handheld system and as such it made a major splash in the videogames world with total sales of over 18 million copies. Statistically this places Super Mario Land for the Game Boy as the 4th most popular Mario title to date just 2 million behind the Super NES's Super Mario World and the fourth most popular title on the Game Boy platform.

Six years after its initial release Super Mario Land was re-released as part of the Players Choice series. Major gaming sites also praised the game in reviews; IGN gave it an average score of 8.4 out of 10 and GameSpot rated it a very respectable 7.3 out of 10. The main point of criticism Super Mario Land received was that the controls and physics of the game didn't have the same precision and feel as their NES and SNES counterpart platformers.